There's Something About Josh 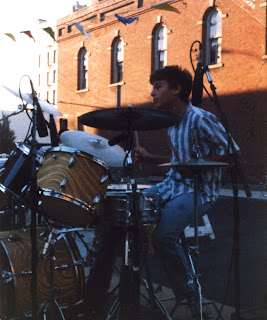 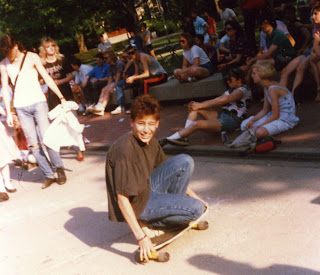 -The Jesus and Mary Chain

Today is the 18th anniversary of the death of my friend Josh so I thought I’d share some pictures and a few memories.

I met Josh when he was 15 and I was 20. I was a student at the University of Illinois in Champaign-Urbana and it was the start of the fall semester, 1984. It was a crisp fall day, blue sky, the Midwestern leaves in full color and I was at some kind of outdoor concert at Urbana High School with my roommate and her boyfriend Dave who were on the lookout for a drummer to complete a band they were forming. I can’t remember if we were there specifically because they had heard about Josh and were thinking of recruiting him or if we just happened to go because when you live in a small Midwestern town where the main sources of entertainment are frat parties and football games you take just about any opportunity you can get to hear live music. In any case, Josh was playing drums in one of the bands that day and something about him struck my friends and they invited him to join their band. He agreed and the Dead Relatives were formed.

Josh was so polite and a bit shy around us at first but that soon wore off and he fit right in. Early on Dave decided he wanted to include Josh more so he planned practices so there was time to hang out afterwards rather than taking him straight home. I would tag along, doing my homework while they practiced (yes, I know, very rock n roll) then hanging out when they were done. Josh came along to parties, shows and road trips to see bands. I spent the better part of my junior & senior years tripping over Josh’s drum kit which resided in our dining room.

Dave started promoting punk rock shows and brought some great bands to town but he fell ill and had to give it up temporarily so I reluctantly ended up inheriting the task. I didn’t really like this job but I loved the music and it was the only way to get the bands I loved so much to come to town. Josh on the other hand took right to it. He was a huge help and whenever I had a problem he was there, calmly offering up solutions. Josh saw only what was possible and worked his way toward it never bothering too much about the hurdles along the way. The fact that by age 17 he was bringing major independent acts like the Pixies and Throwing Muses to such a small town was no surprise to me.

Though impressive, Josh’s concert promoting skills were only a small part of what made him such an awesome guy. Above all he was a great friend, funny, smart and a joy to be around. When he came along with me on flyer hanging expeditions, a tedious chore, the time would fly by. We were having breakfast in a Chicago restaurant the day after some show we had come up to see and Josh had me laughing about the hardest I’ve ever laughed in my life-tears streaming down my eyes, stomach cramping up, the whole bit. I can’t remember what we were joking about but I was having such a good time, it was one of those rare moments where you can’t imagine wanting to be any other place or with any other people than right where you are at that moment in time. Josh was a big part of the fun parts of my college years and I’m so thankful that I knew him.

When I was a teenager I fell off a fast moving horse and had the wind knocked out of me when I hit the ground. This was the exact same feeling I had when a friend called and told me that Josh had died of Lymphoma. I was incapable of speaking and had to hang up the phone. When I graduated and moved back home to Chicago in 1986 I fell out of touch with most of my college friends as I focused on finding a job, apartment, etc. At some point a couple of years later Josh moved up to Chicago and I found out and gave him a call, trying to meet up with him. By then I knew he was seriously ill but I had no details. He sounded so tired on the phone and I didn’t want to pressure him to go out. We made loose plans to meet a few days later outside a club for a show. I told him I’d be there but I’d understand if he didn’t make it. He never showed up and I’m pretty sure that was the last time I talked to him. Unfortunately the friend who informed me of Josh’s death told me 3 weeks after the fact so I missed the funeral. I heard that people were lined up outside for blocks. To this day I’m furious with myself for falling so out of touch and not being there for him.

I don’t think you ever truly get over losing a friend like that at such a young age. I can’t even begin to fathom the pain his family went through. Josh’s parents set up a memorial fund in Josh’s name to provide money for continuing education for nurses working with Lymphoma patients. Josh’s dad is an economics professor at the University of Illinois and so popular with his students (he’s often voted best professor on campus) that they organize fundraisers for Josh’s fund. I found one fraternity that’s been sponsoring an annual 5k run (Jog for Josh) for 5 years or so now. I’d also like to add that Josh’s dad was incredibly supportive of Josh. How many parents let their 15 year olds hang out with college kids or endure a night of noisy punk rock to see their kid’s band play? Josh packed a lot of life experiences into the short time that he had and it was in large part thanks to the freedom and support that his family gave him. His sister Lisa was (and probably still is) just as sweet and full of life as Josh was. Josh and Lisa seemed more like best friends than siblings which I think is a testament to the wonderful family they had supporting them.

20 years later I still think of Josh and shed the occasional tear over his death. I’ll always carry around my wonderful memories of him-his sweet smile & infectious laugh, the devilish look he’d get in his eye when he was planning some kind of good natured mischief, the many many times he made me laugh, his boundless enthusiasm & energy. If anybody who knew Josh is reading this and wants to post something please feel free to put it in the comments. I’ll post any photos anybody has too, just email me (colliebrains at juno dot com).

I apologize for the quality of the photos I have. My only camera back in the day was a crappy Kodak 110 Instamatic that required flash cubes for indoor shots. Some of the photos were cropped from the background of a shot of the other band members. Unfortunately drummers often get left in the shadows in band photos. Josh always looked so nonchalant when he played. I’d have to tease & cajole to get him to smile for the camera. He looks so impossibly small compared to his drum kit in those early shots.

I’ll also provide some links to other info. about Josh I’ve found. If anyone wants to add a link feel free to do it in the comments and I can add it here. 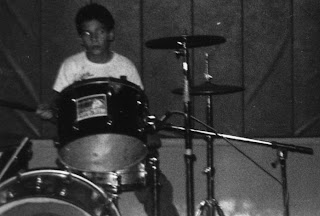 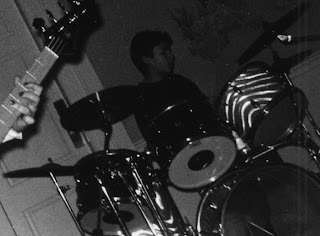 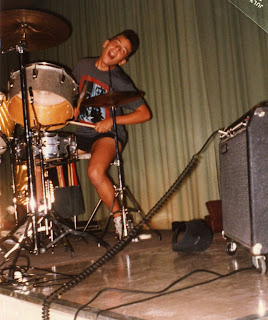 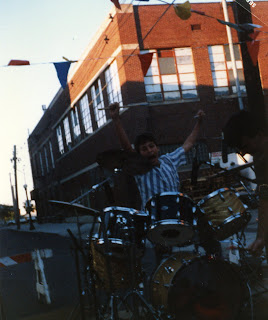 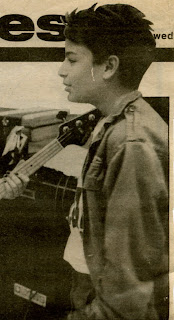 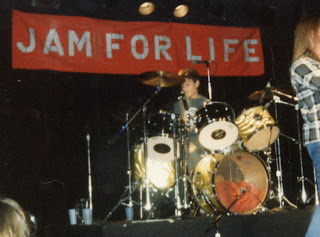 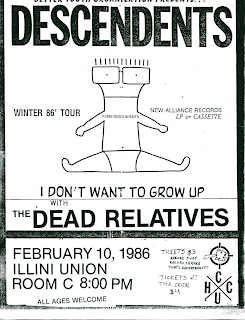