More Oura Ring and a Setback

I was feeling pretty fit and feisty these days, was even starting to formulate some formal-ish goals for the summer. Then I tripped on my morning dog walk. I'm not even sure what happened, I was admiring the beautiful scenery and next thing I knew my chin and head were hitting the slick rock. I tripped/twisted my ankle/fell going down a small, rocky drop off on the slick rock. Just wasn't paying good enough attention I guess, maybe Ruby pulled me a bit, I dunno. Mostly superficial bumps and bruises and of course I fell on some cactus so that wasn't fun but unfortunately I twisted my ankle to the point of needing to be on crutches. 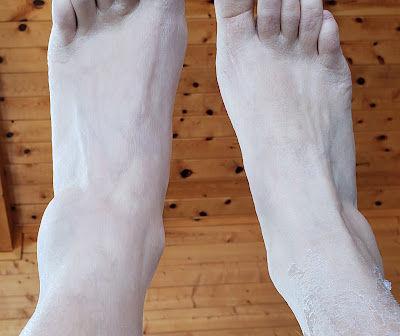 Also my posterior tibial tendonitis has been flaring up here and there over the past few weeks as it is wont to do and I think this is the reason why I can't bare weight on the foot at all. I'm not sure how I hike the mile or so uphill on uneven slick rock to get back to the car but now everything is so swollen and seized up that I have to resort to crutches. I have this possibly delusional idea that I'll wake up and be fine tomorrow morning but we'll see. I twisted the other ankle and fell while hiking a few days ago and that recovered no problem and taking a day off seems to be 'working' for the posterior tibial crap show. I did all the PT and exercises and night boot for this 5 years ago and it really never got all that much better. So when it flares up I take a day off and that usually does the trick. I had been doing calf raises for it and some foam rolling but I'm not consistent enough with it. Such a beautiful day today too, I was having big debates about what the day would hold on the way to the dog walk trail, was maybe even going to get my ass up to Dolores for some fat biking but instead here I am, on the stupid computer, finally getting back to the blog.

The Oura ring has been interesting. Good in some ways, frustrating in others. There are days when I wake up and I'm not sure if I'm feeling up for some training and the ring is not sure either. It'll say, 'Listen to your body'. Well, I don't need a damn expensive ring to tell me something so inanely obvious. OTOH, there are days like yesterday where I felt tired and unmotivated but also felt like maybe I was being lazy and I really should get my ass out the door. And the ring showed that my overnight recovery wasn't great and yeah, you probably should take it easy. 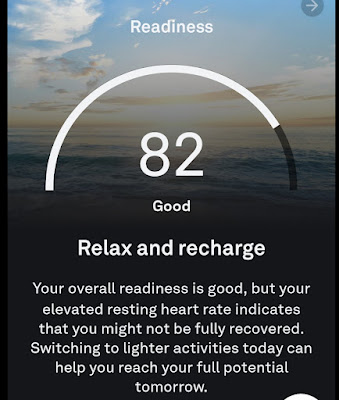 The app breaks down the Readiness Score so you can see where your recovery is lacking. 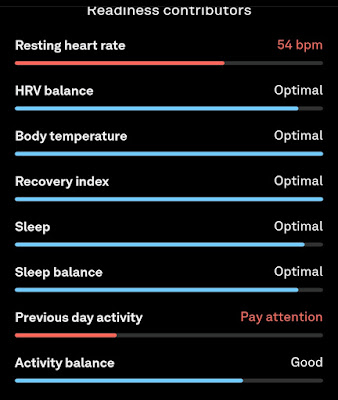 The red flag here is lowest overnight resting heart rate. Apparently this is a big measure of how recovered you are. The chart below shows that it went up from 52 the night before to 54 and apparently this is a large enough jump to be of concern. Previous Day Activity is also in red and this is one of my annoyances with the app, I'll get to that later. 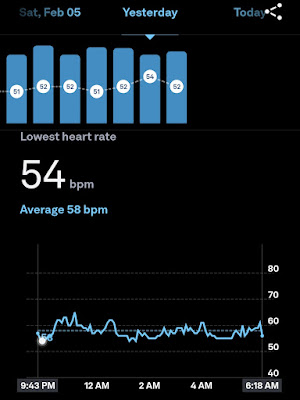 The ring also measures overnight HRV (heart rate variability). You want this number to be high. 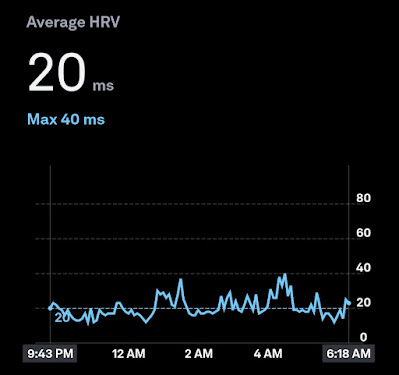 My average overnight HRV since I got the ring is 29 and I like to see it up in the 30's at bare minimum so 20 is pretty low for me. So this day, which was yesterday, turned into a rest day of sorts (I still did a half hour of weight lifting) which is a bummer because today is also now a rest day and who knows how many more days.

I was planning on going back to the pool in March because I think by then Omicron will have run its course but maybe I'll go back sooner. Haven't been in the pool since August so it won't be pretty. But it's better than nothing. Our case rates were still pretty high on Friday but they were declining slightly so we're likely on the downturn. Probably is o.k. anyway, I'm probably being over cautious. Or maybe making excuses for not going back to the poo because it won't be pretty. Also I really prefer to be outside and the weather has been so nice, hate to be inside when it's so sunny outside.

The sleep data from the ring is pretty cool but the accuracy is questionable. The Deep Sleep is supposed to be fairly accurate, the REM sleep not so much. The overall amount of sleep, waking and falling asleep times, seem pretty accurate. The newest version of the ring, Gen 3, which is the one I have, was released before a lot of the software for the new and improved features was ready and this includes the sleep algorithms so despite having all the new sensors and gizmos and whatnot, the software is still old school and no word from Oura on when the updates will happen. 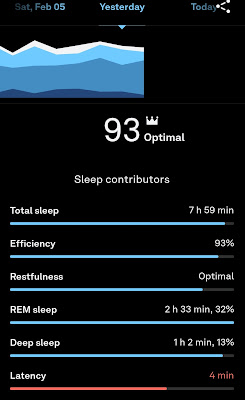 I always get dinged for Latency which is the amount of time it takes you to fall asleep. The problem is I do take 20 minutes or so to fall asleep but I don't turn my light off and stop moving until I feel myself drifting off so the ring can't tell I've been in bed. This is a common complaint and a stupid metric.

Graph of the sleep stages. 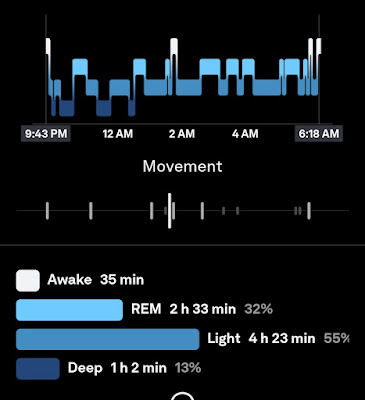 My main beef with the ring is the way it tracks Activity. It gives you a daily goal, which is good, previously I'd shoot for 10,000 steps a day in addition to whatever other training I do and this seemed very random and often not realistic if I'd had a long, strenuous bike ride where steps aren't counted. My beef is that it gives you your goal in calories which is the most useless metric ever on the face of the earth. Even more confusing is that it will tell you throughout the day how many miles you have to walk to reach your calorie goal and often I'll have 30 calories left to reach my goal and it will tell me I have to walk 1.3 miles. To burn 30 calories. But it will give me credit for the 30 calories once I've walked what seems like a reasonable amount, it doesn't REALLY make me walk the 1.3 miles. To add to the confusion it will tell me how many steps I've taken and it will take into account my biking and other exercise but not in a necessarily consistent or logical way. I've tried to figure out the equivalence between steps and calories and I promise you it's not consistent. The big problem though is that the amount of activity is assigns me per day is way too low, it must be based on my body weight/height or something because the maximum amount never changes and it goes down to a ridiculously low amount on rest days. If I exceed it too much for too many days in a row I get dinged on my Readiness Score for not taking enough easy days. So I take my Readiness Scores with huge grains of salt and go mostly by overnight Heart Rate and HRV metrics. Which leads the ring to leave me daily passive/aggressive messages of you really need to sit on your ass today. I think this thing is designed for more sedentary people or something, which is fine but there should be some way to work around it. Maybe there's a setting somewhere and I need to dig a little deeper. Fun with technology.

In the meantime Ruby is helping me with my unintended rest day. 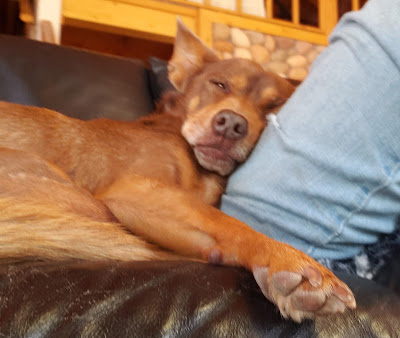