Come Closer and See, See Into the Trees

I'm three weeks out form my second vaccination and still getting sporadic dizziness. Yesterday was perhaps the best day I've had since shot number 2, had a good bike ride, starting to feel a little feisty, then today was one of the worst days I've had in a couple of weeks. When I started back to riding a couple of weeks ago I noticed my heart rate would be way too high for the exertion level I was putting forth. I'd have a day where I could ride, then need to take the next day off, each cycle having some improvement in heart rate until finally yesterday I was feeling maybe 90% of normal. Then woke up at 4:00 this morning with my world spinning around again. A few days ago I finally had the idea to check with the Slowtwitch Forum because those triathletes are crazy data nerds when it comes to training. Sure enough there was a huge thread full of people experiencing exactly what I'm experiencing. They also gave me the great idea of checking my Heart Rate Variability (HRV) which is a measure of overall stress to your body. Many folks were reporting huge off the charts spikes in stress values right after their vaccines and also in training afterwards. I checked my HRV today using my Garmin and it was 89 on a scale of 1 to 100 with 100 being the highest stress mark. This put me in the High Stress zone. Yikes. So on this beautiful perfect spring day I'm inside typing away, thankful that the fog finally cleared enough for me to be able to string sentences together. Sort of.

Many on Slowtwitch speculate that athletes are struggling more because our immune systems are stronger and are mounting a more powerful response. I'd like to believe this is true but I have no idea how true this is. I've also heard that women are struggling more, presumable a hormone thing. I think we're still in far too experimental of a stage to have any good data or science on the matter but I dunno. At least I know I'm not crazy or lazy, so many days of this I felt like I was slipping into laziness. I'm going to keep better tabs on my HRV and cut myself a little more slack.

Last Sunday I went to a tour of an area that was logged in a similar fashion to what is being proposed for Boggy Draw. Many different officials were there - several Forest Service guys, some from Dolores Watershed, etc. Many experts. I think more experts than civilians. Most of the civilians were bikers/hikers concerned about the trail system. The purpose of the tour was to show the public the type of work they're proposing to do at Boggy Draw. And this was thanks to all the people who left comments, thanks so much if you left a comment. Thanks to all the comments they're going to take more care with the Boggy Draw area, re-routing the trail where they can, trying to keep it open as much as possible, trying to preserve the aesthetics of the area, etc. Or so they say. We'll see what really ends up happening. I'm skeptical at best.

Anyway, here's an example of untreated forest. Again, this is an area called Chicken Creek, not Boggy Draw or even very near to it. 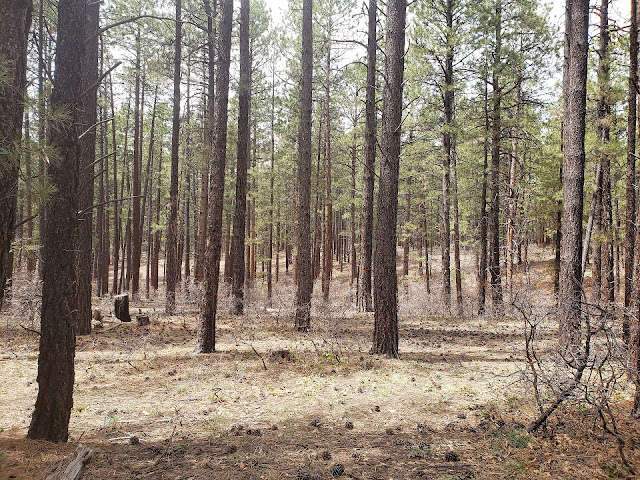 Now I'm no forestry expert but even I can see how this forest is both unhealthy and dangerous from a fire danger point of view. This isn't nearly as bad as what you commonly see on the Front Range but still the trees are very dense and all the same age and roughly the same size. This area was clear cut back in the early 1900s so the trees all grew back as a monoculture. I've not noticed Boggy to be this bad, in fact when we moved here I was amazed at how open the woods at Boggy were and others who have come to visit me from the Front Range have noticed the same thing. But for sure there are areas that are too dense.

This is an example of the logging they did at Chicken Creek to thin the forest. 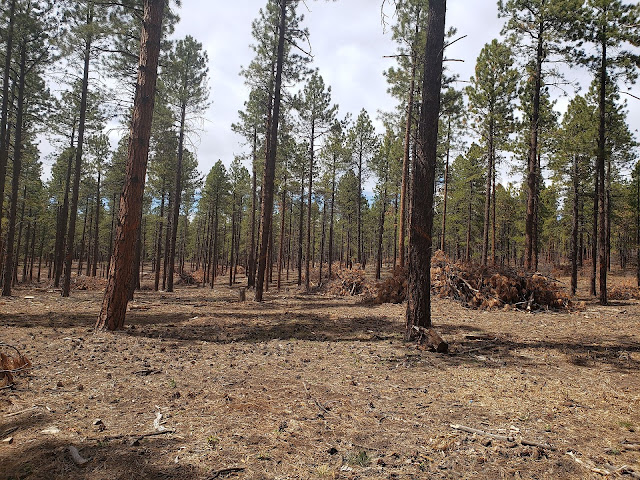 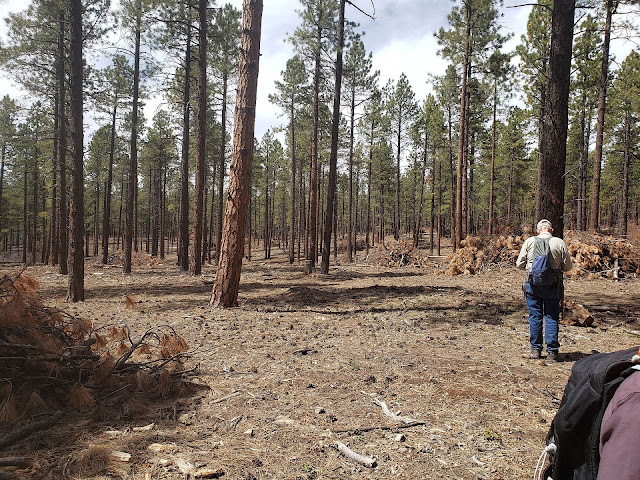 They'll eventually burn the slash piles when weather permits, probably in the winter.

Forest Service did say that this is still not ideal and they'd probably take twice as much at Boggy primarily because they have industry that will do it. For the logging shown above they did not have the industry in place (ie a large sawmill) that was willing and able to do the work so they couldn't do all that they wanted to. But this actually looks really good to me, I find really dense forests to be unnerving and uninteresting. They're a huge hazard for those explosive mega-fires and it's boring when you can't see very far into the woods. They also allowed that Boggy is different so this isn't a direct comparison but does give one an idea of the spirit of the work. And I'm totally fine with this, I think this is actually  a really really good thing. I've always been in favor of this type of fire mitigation and if they'd been clearer about their intentions when they first announced this I wouldn't have become so worried. I'm still not thrilled, it'll be a huge disruption to the forest and the work is supposed to last 10 years though not at the recreation area for that whole time. The poor people of the town of Dolores will have terrible logging traffic tearing through their town and we'll have to contend with the logging trucks when we drive up the narrow mountain roads to get to the trailhead. Though the bike club did get the go ahead to build a trail from the town of Dolores to avoid the road and Jonny is currently at the first trail building session so I'll get a report on it later.

When Forest Service did fire mitigation on the popular West Mag trails up from Boulder they clear cut huge sections of hillside and left a terrible mess of giant slash piles, stumps, debris. It was heart breaking. When they announced the Boggy logging project there was mention of clear cutting and that's why I became nauseous. However I asked the Forest Service guy point blank if they were going to clear cut at Boggy and he said absolutely not. I remain a bit cautious and skeptical and still not thrilled but I do see value in this project, at least for now.

Initiative 16 goes before the Colorado Supreme Court on May 5 I think. We'll see what happens. But at least I can sleep a little better knowing my beloved woods aren't going to be gutted. Hopefully. Thanks again to all who left comments.