Since Lola can't do agility any more I'm trying to find other fun things for us to do together.  While I'm sure she's not sitting at home thinking, 'Boy I really miss agility', she is pissed off when I pack up the dog bag with toys and goodies and Strummer and leave her home.  And she's not shy about expressing her feelings.  I come home to some sort of mischief she's been into or ransacked cabinets/closets.  So I've been trying to take her hiking, just me and her, once or twice a week in addition to her regular walks and play time.  She's a pain in the ass in the woods though because her prey drive is through the roof so I have to be selective about where she goes or risk getting my arm pulled out of its socket in the pursuit of Squirrel or Prairie Dog. 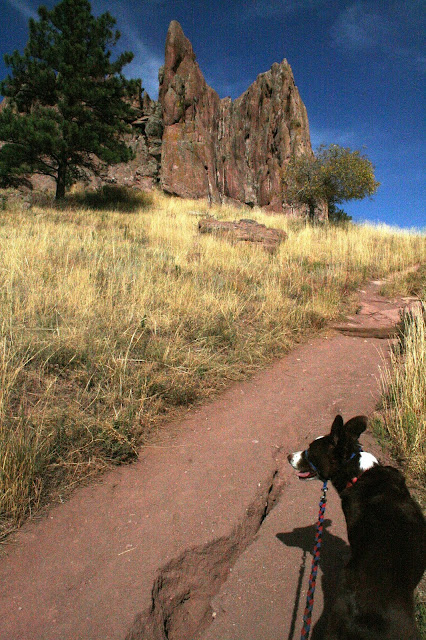 Red Rocks is a short trail at the edge of downtown that hooks up to Mt. Sanitas if you want a longer hike but there are a bunch of little side trails and I think it's how you get up to the area where the Dome Fire started last week.  I was there the week before the fire started so no smoke in these photos.

Unfortunately I had my camera on some manual settings that were totally inappropriate and didn't realize it until the middle of the hike so even though I had a beautiful sunny day that any moron could take stunning pictures in I managed to take pictures that came out all black.  And of course they were the best shots of the rock formations.  But I caught a few shots on the way back on a different trail after I fixed the settings.

This is the bottom of Mt. Sanitas, not the Red Rocks formations 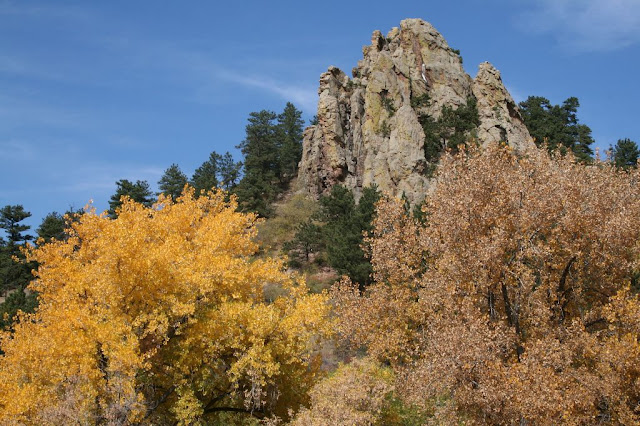 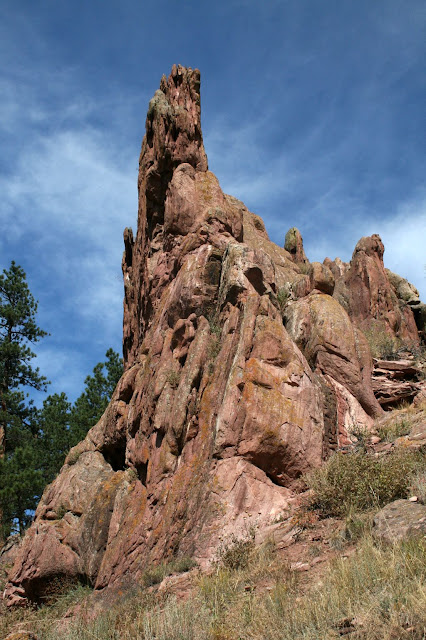 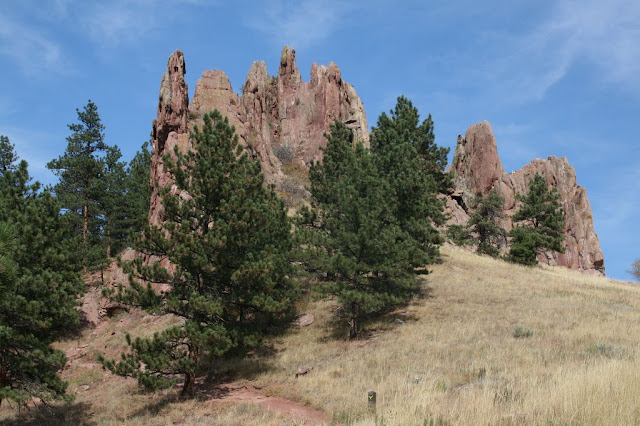 Lola having a roll around at Eben G. Fine Park which is right next to the Red Rocks area. 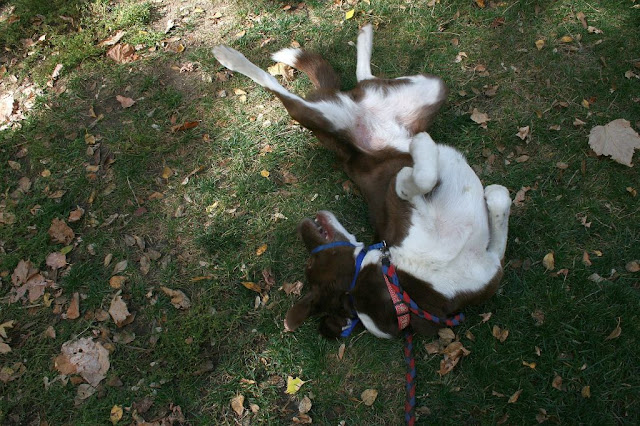 My neck and back are still bothering me from the car crash so the chiropractor banned me from going on any steep rocky trails since bombing down a rocky trail will make my neck worse so I grudgingly headed out for the Boulder Creek Path on my bike.  I normally barely notice it because if I'm on it it's to get to or from a ride that goes higher up the canyons.  Then I realized how spoiled I am because it is a pretty trail.  Below are photos of the Elephant Buttress climbing area which is the south boundary of the Dome Fire.  Again, I was there a week before the fire started.  The fire is behind these rocks and since I'm not a climber I'm not sure if you can see Dome Rock from the trail or if it's behind on the Open Space where the fire is burning.  Currently it's fully contained but I don't think it's completely out.  I drove past the area yesterday and the trails over there were still closed due to the fire.

Elephant Buttress.  If you look closely you can see a climber. 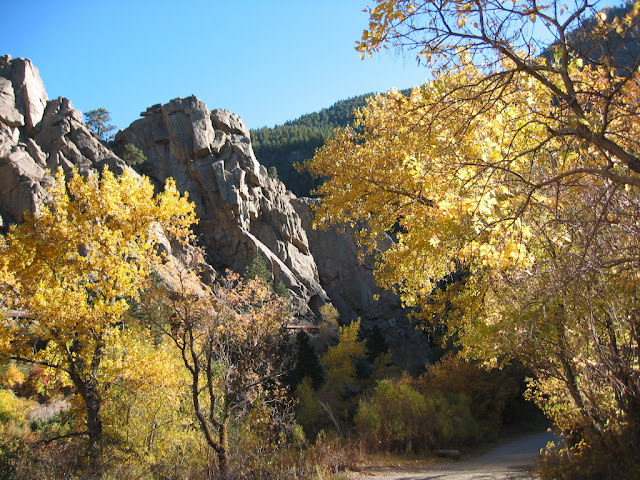 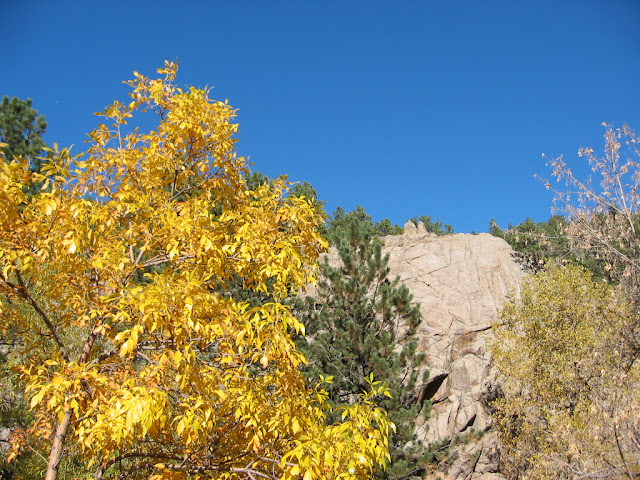 I suppose there are worse places I could ride to rehab an injury. 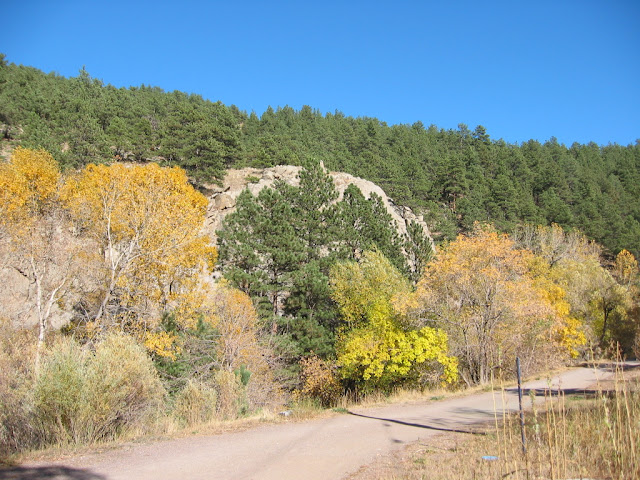 Edited to add:
Turns out I did have a photo of the Dome 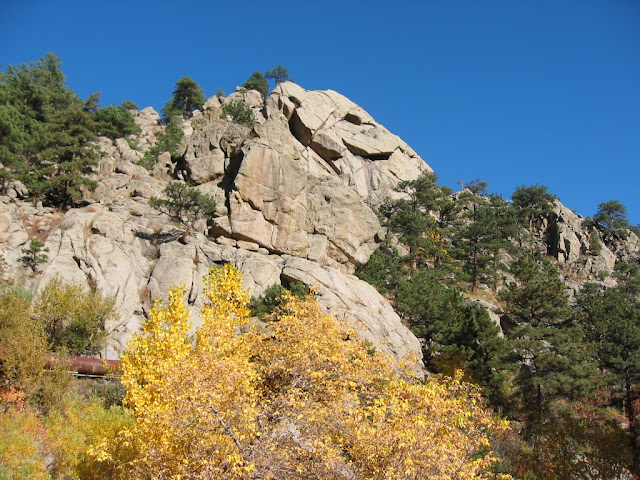 Weird that I was out taking pictures a few days before the fire.  I can't remember the last time I was on the Boulder Creek Path, it's probably been at least a year or two.  And I haven't been to Red Rocks in maybe 10 years even though it's 10 minutes away.
Posted by Elayne at Wednesday, November 03, 2010